Can Zuckerberg’s Internet.org really raise 1 in 10 people out of poverty in India? 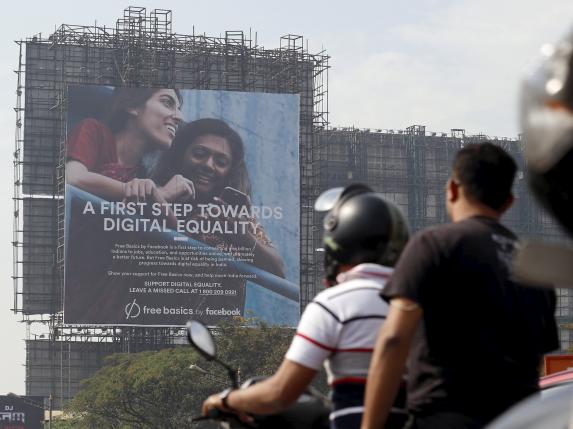 India has become a battleground over the right to unrestricted Internet access, with local tech start-ups joining the front line against Facebook Inc founder Mark Zuckerberg and his plan to roll out free Internet to the country’s masses.

This is a big story worth watching. A large US-based internet company is trying to provide free internet to countries which have a very low connection rate per their population.

It’s being debated in India at the moment. There are really generous and “BIG” ideas about how powerful this could be for marginalized people in countries like India. But there are also very loud and intelligent skeptics who see Facebook’s strategy as a corporate grab for market-share rather than a benevolent act of charity.

Historically, Facebook is a very significant proponent of Net Neutrality. It’s in their best interest for as many people as possible to not only be able to access Facebook.com, but also any and all services and articles that are linked to Facebook. Nevertheless, here’s the summary of concerns that some in India (and other places) are voicing:

It is our belief that Facebook is improperly defining net neutrality in public statements and building a walled garden in which the world’s poorest people will only be able to access a limited set of insecure websites and services. Further, we are deeply concerned that Internet.org has been misleadingly marketed as providing access to the full Internet, when in fact it only provides access to a limited number of Internet-connected services that are approved by Facebook and local ISPs. In its present conception, Internet.org thereby violates the principles of net neutrality, threatening freedom of expression, equality of opportunity, security, privacy and innovation.

To these concerns, Mark Zuckerberg has his own post on his platform:

Internet.org doesn’t block or throttle any other services or create fast lanes — and it never will. We’re open for all mobile operators and we’re not stopping anyone from joining. We want as many internet providers to join so as many people as possible can be connected.

Arguments about net neutrality shouldn’t be used to prevent the most disadvantaged people in society from gaining access or to deprive people of opportunity. Eliminating programs that bring more people online won’t increase social inclusion or close the digital divide. It will only deprive all of us of the ideas and contributions of the two thirds of the world who are not connected.

It’s also a bit interesting that the ruckus over Internet.org in India comes on the coattails of seeing it abruptly shut-down in Egypt just weeks ago.

My bottom line is that the aims of Internet.org are praise-worthy. And what they were providing in Egypt and would like to provide in India also seems praise-worthy. But — as we say in the U.S. — the “proof is in the pudding”. There’s no real way to know whether this initiative really can lift 1 in 10 people out of poverty (as Zuckerberg claims in Reuters article) until it has a long-lasting and well-tested trial in a country where it’s impact could be significant.

That could be India. There is no shortage of tech-saavy users and advanced developers in India. But there is a shortage of Internet availability. Here’s to hoping for the best.

This article is a commentary on the article of the same title on Reuters.com

I'm Head of Support and Community Outreach at GiveWP.com and Impress.org. I'm the author of several popular free plugins and Lead Admin of the Advanced WordPress Facebook group (which boasts over 30K members). I blog often at mattcromwell.com, givewp.com, wordimpress.com, and mediatemple.net. View all posts by Matt Cromwell

I'm a historian, web developer, musician, culture-lover who wants to help you get stuff done. I love public dialog (aka blogging) -- particularly when related to religion and/or politics. I love helping non-profits and academic institutions or professionals create online mediums for learning. Bottom line: I wear a lot of hats, choose one and I'll help you out.

Other Places I Write

My personal site. I write on WordPress, Religion, and Politics. You know... the usual. I also have several WordPress themes and plugins available there.

Proud business partner and contributor to the Give Donation Plugin for WordPress. We provide tools and resources for non-profits on our blog as well as news and stories about Give and how it's being used to better the world.

Proud Partner and Head of Support and Outreach at Impress.org. We build high-quality, fully supported WordPress plugins for businesses. I blog there regularly on a wide range of topics related to WordPress.