“…the very tools we use to manage the overwhelming amount of data to be found online are, instead, causing us to become less receptive to differing political opinions.”

I love newsfeeds and aggregators. In fact, I’m experimenting with WordPress’s new Calypso app this second to serve as an aggregator for me to share thoughts on the fascinating stuff I’m reading.

This article strikes a nerve though because I’m all about having a well-rounded perspective on things. I want to be aware of various perspectives and entertain new thoughts and ideas. If my tech is actually limiting me, then I need new tech.

The thing is, there is passive tech and active tech. This article speak primarily to the way in which Facebook, Twitter, Amazaon and Google purposely serve you up things that they think you will “like”. Which means they want to serve you up things you already agree with.

The bottom line is that all of these things are mediums — not ends. Even Facebook can be configured to bring in alternate views. Maybe you’ve purposely muted that crazy neighbor who spews right-wing theories because “you just can’t”. But maybe you just need to. Just to be able to challenge your own biases and prejudices… because you’re human. We’re all biased, prejudiced, scared, defensive. It’s in our genes to be so.

I'm Head of Support and Community Outreach at GiveWP.com and Impress.org. I'm the author of several popular free plugins and Lead Admin of the Advanced WordPress Facebook group (which boasts over 30K members). I blog often at mattcromwell.com, givewp.com, wordimpress.com, and mediatemple.net. View all posts by Matt Cromwell

I'm a historian, web developer, musician, culture-lover who wants to help you get stuff done. I love public dialog (aka blogging) -- particularly when related to religion and/or politics. I love helping non-profits and academic institutions or professionals create online mediums for learning. Bottom line: I wear a lot of hats, choose one and I'll help you out.

Other Places I Write

My personal site. I write on WordPress, Religion, and Politics. You know... the usual. I also have several WordPress themes and plugins available there. 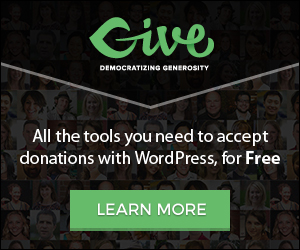 Proud business partner and contributor to the Give Donation Plugin for WordPress. We provide tools and resources for non-profits on our blog as well as news and stories about Give and how it's being used to better the world.

Proud Partner and Head of Support and Outreach at Impress.org. We build high-quality, fully supported WordPress plugins for businesses. I blog there regularly on a wide range of topics related to WordPress.